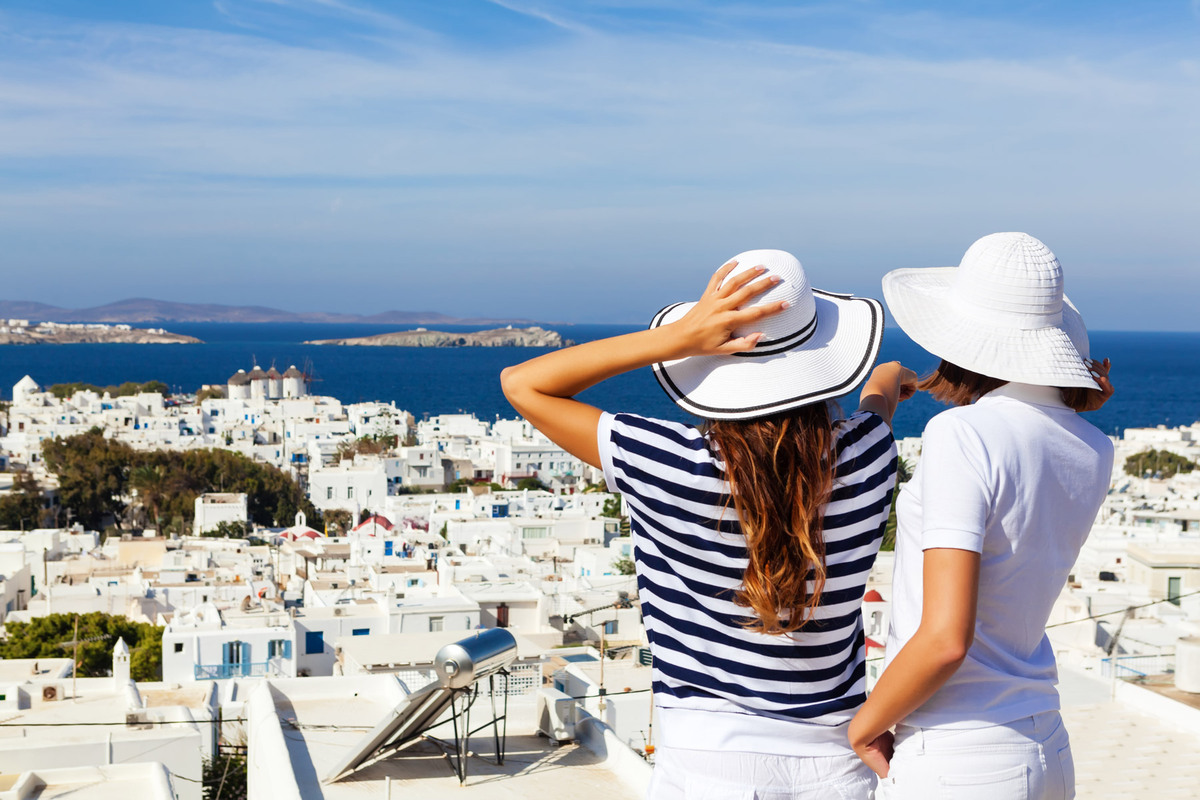 The Magic of Mykonos: a Brief Guide

The sea, wind, birds, and whitewashed churches with gold-plated domes make the island of Mykonos unique. Every evening, travelers and local citizens gather in open-air cafés to have a glass of ouzo and watch the sun slowly setting in the quiet Aegean Sea.  The evening is a magic time when life on the island is just beginning. Don’t hurry! It is not the Greek tradition. But if you make a short plan of action in advance, you will have time for everything and even more. 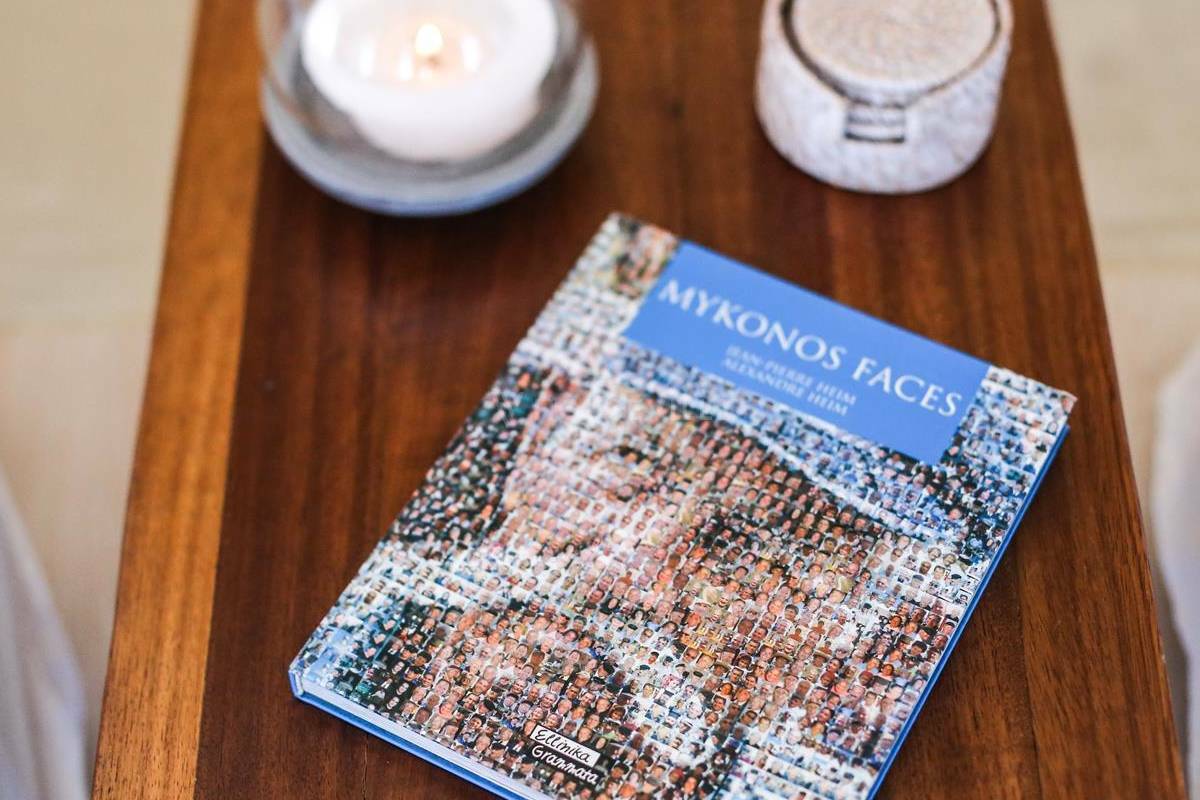 Mykonos reminds both Saint-Tropez and Ibiza

Watch the sun slowly setting in the Aegean Sea

The atmosphere of Mykonos reminds both Saint-Tropez and Ibiza but you will hardly confuse it with any other resort. Dazzling white houses resembling lumps of sugar became the island’s hallmark, its holiday outfit. Thanks to them and the magnificently preserved cultural heritage, Mykonos is still one of the most densely populated island on the Greece tour itinerary, which is surely proved by the cast of A-list celebrities who never ignore the island. The island’s beauty, hectic social life, the mildest climate, and food worthy of the gods made it a real Greek celebrity. Aristotle Onassis, the notorious billionaire, was the one who brought the island to the mainstream and made it the capital of the holiday and fun. Celebrities followed him to Mykonos. Some even could not help but buy charming Cycladic-style houses. White as clouds, they look spectacular, especially against the rich blue sky. This is the island’s brand. Even hotels and villas look the same in order not to stand out from the overall glamorous design. Of course, there is not even the spirit of antiquity inside: everything is super-modern with perfect technical part.

Aristotle Onassis, the notorious billionaire, was the one who brought the island to the mainstream and made it the capital of the holiday and fun 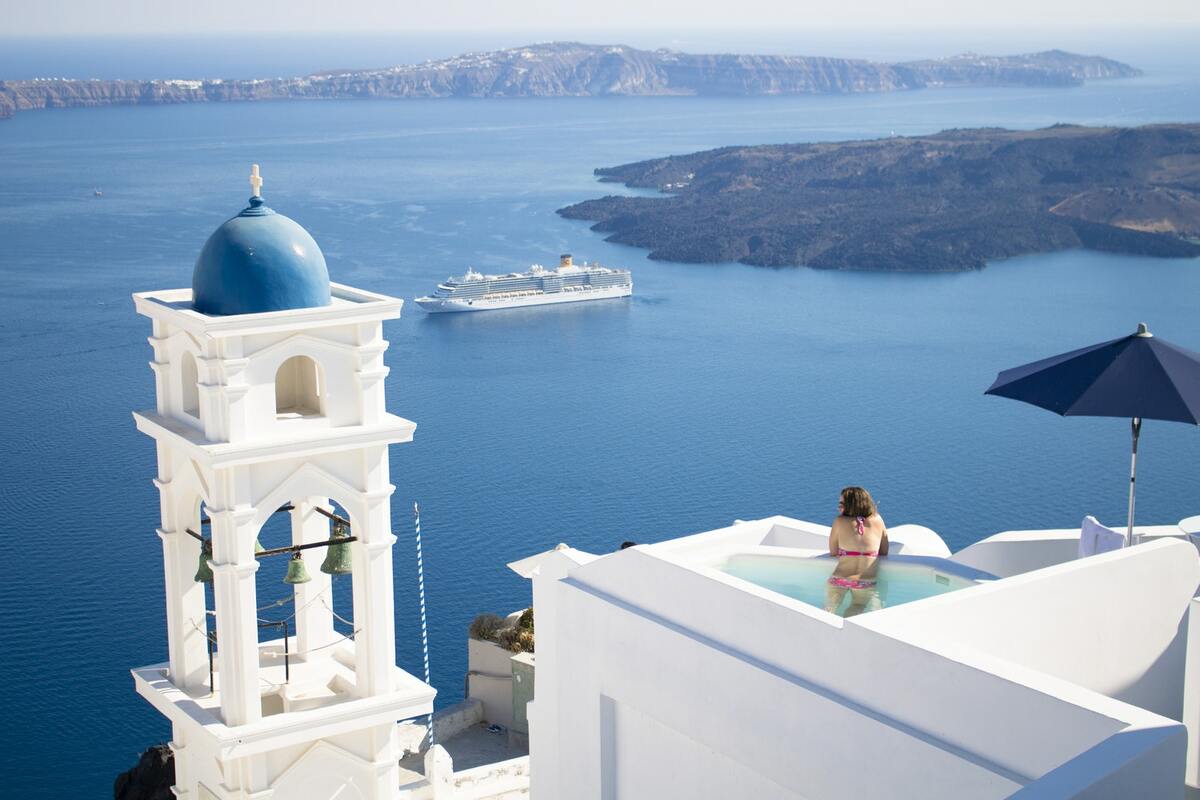 This is the island’s brand

Hotels and villas look the same

Do not think that we are talking about various fashionmongers and fashion bloggers.  Fashion icons may mean indicative “features” creating the unique image of the island. You will definitely notice them when approaching Mykonos from the sea: snow-white windmills against the deep blue sky look awesome and a little bit unreal.  A while back, the island was called the island of windmills because of these structures built far back in the 16th century. Not all of the giants with wing-like blades survived. There are only seven of them left, and it is a must for every self-respecting to make a picture of them. If you have time, return to the windmills again at sunset with your loved one and a bottle of white Cycladic wine, and you will see the real magic.

A while back, the island was called the island of windmills because of these structures built far back in the 16th century 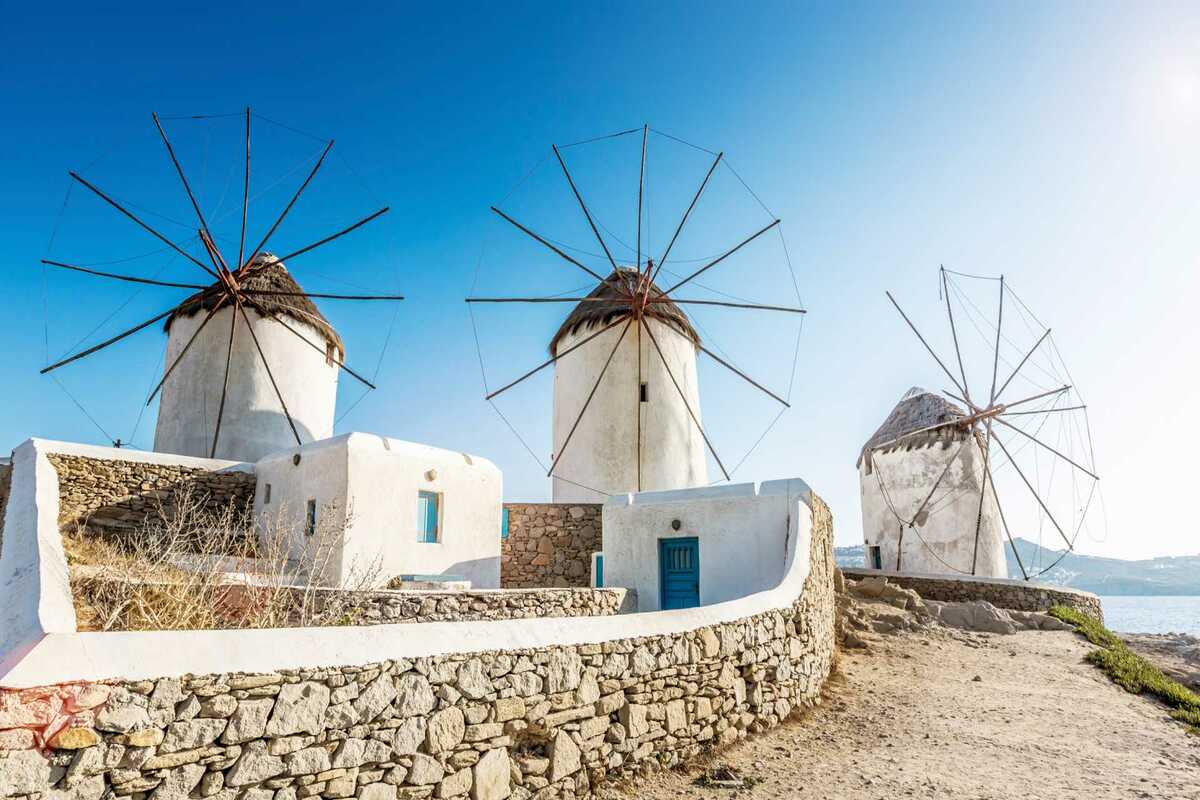 Mykonos — the island of windmills

There are only seven of them left

Town or Chora should be the next stop of your journey. Two- or three-storeyed medieval houses are a wonderful place to have a glass of Greek wine and enjoy the sunset. In fact, it is a part of the old embankment, which you can admire during a boat trip. Pay attention to the balconies hanging right above the water as if the owners of the houses were real divers. If you know that the block was built at the heyday of smuggling, you can imagine how convenient it was to deliver the forbidden cargo directly from “shipboard straight to the ball”. A really bold idea! The times of corsairs and gentlemen of fortune are far in the past. Now Chora is the place of romantic cafes, hotels, bars, and restaurants, in one of which you can cast anchor.

Pay attention to the balconies hanging right above the water. You can imagine how convenient it was to deliver the forbidden cargo directly from “shipboard straight to the ball” 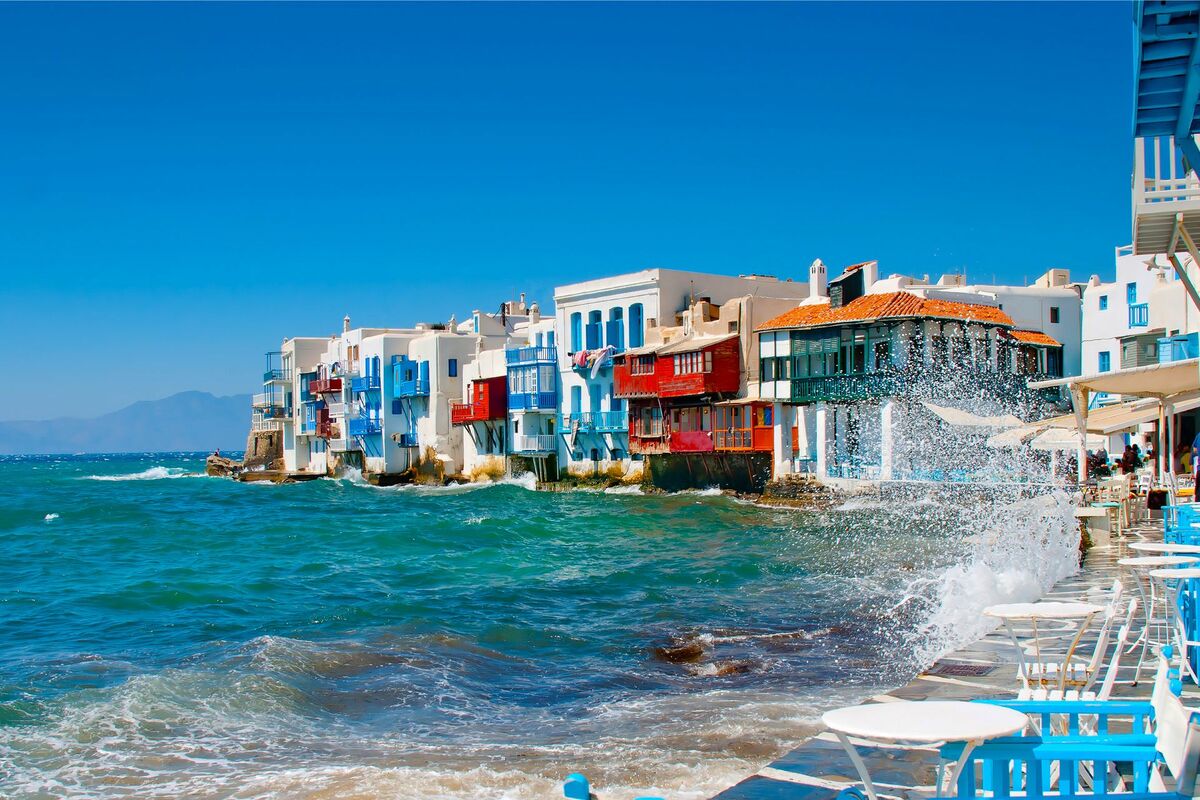 A wonderful place to have a glass of Greek wine

Just 20 minutes by motor boat, and you are on Delos Island. Never heard about it? To start with, you should know only three things about the island: it is uninhabited, it is an open-air museum, and, yes, it is on the UNESCO World Heritage List. You’d better spent a day to visit Delos and believe us, you will not regret. You will get a dose of genuine antiquity you will never forget. Like nowhere, the ruins here seem alive; you feel life in every stone and you are like an adventurer who finds himself in a lost city. Take a walk along the lions alley, admire the mosaic floors of the once luxurious shrines, and take a selfie against the magnificent temples. Each stone, arch or column are accompanied by information plates. Tiny, just three and a half thousand square meters, in the old days, Delos was considered almost the center of the Hellenic world. Every self-respecting Greek was obliged to visit the place of birth of the sun god and the moon goddess, the twins Apollo and Artemis. Judging by the modern sun worshipers who have overflowed the island, nothing has changed since then.

Tiny, just three and a half thousand square meters, in the old days, Delos was considered almost the center of the Hellenic world 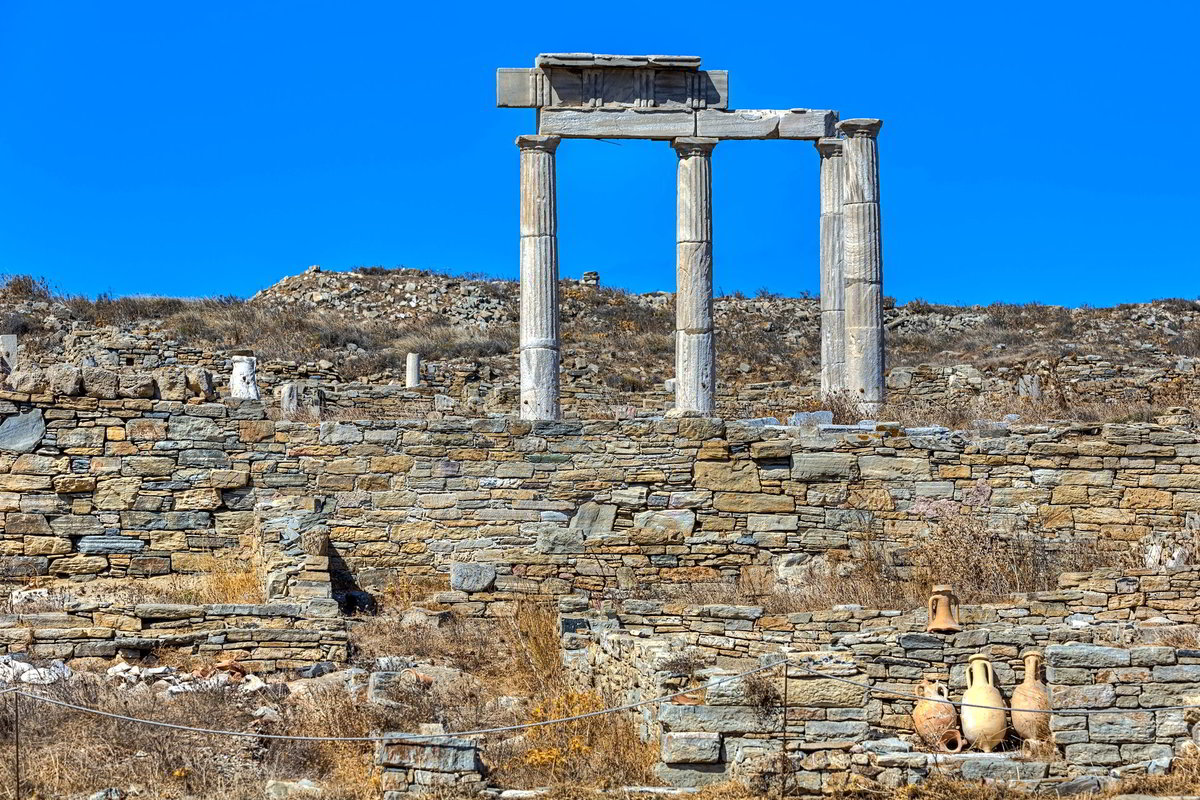 What a sun worshiper without the necessary dose of ultraviolet? Mykonos is really rich in beaches. One beach is better than the other. As for us, we enjoyed sunbathing on Elia Beach. One of the longest, clean, and beautiful beaches, it is reliably protected from the wind by the rocks. Of course, you are not the only who knows that this beach is the best one. But even all of Elia Beach admirers come here at the same time, you will still be able to find a secluded corner for yourself. It will be even easier to find a lively place. The beach is full of cafes, restaurants, water activities, especially for young visitors, who can try themselves in windsurfing, take a ride on a banana boat or just hang out at a water park for a whole day.

Elia Beach is one of the longest, clean, and beautiful beaches, reliably protected from the wind by the rocks 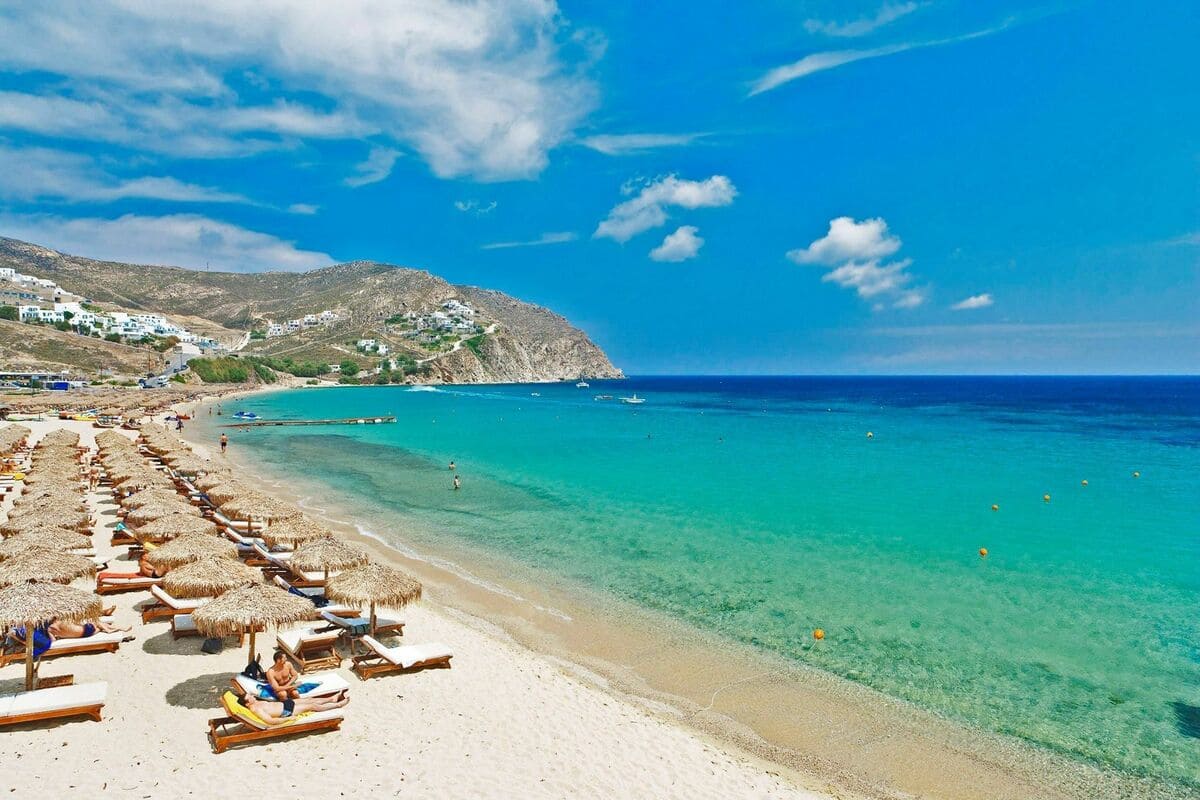 Or enjoying your own pool

If you lived in Mykonos, you could go to a new church every day. As the residents say (and we have no reason to mistrust them), there are exactly 365 churches on the island. One for every single day. Of course, you don’t need to visit everyone, otherwise your vacations will turn into a pilgrimage. But there is one you definitely should visit. We mean the amazing

Church of Panagia Paraportiani. The great Antonio Gaudi himself drew inspiration from this temple. He admired the church and then built his masterpieces in Barcelona. Not only the brilliant architect appreciated the charm of the church, but also photographers. If you google the word “Mykonos”, you will always get hundreds of photos of the Church of Panagia Paraportiani. The church is really great. It looks equally beautiful in the dawn and at sunset painting the snow-white facade pale pink. Actually, this is not one church, but five. Just the fifth one is on the tops of four. One cannot imagine a better selfie background.

If you lived in Mykonos, you could go to a new church every day. There are 365 churches on the island 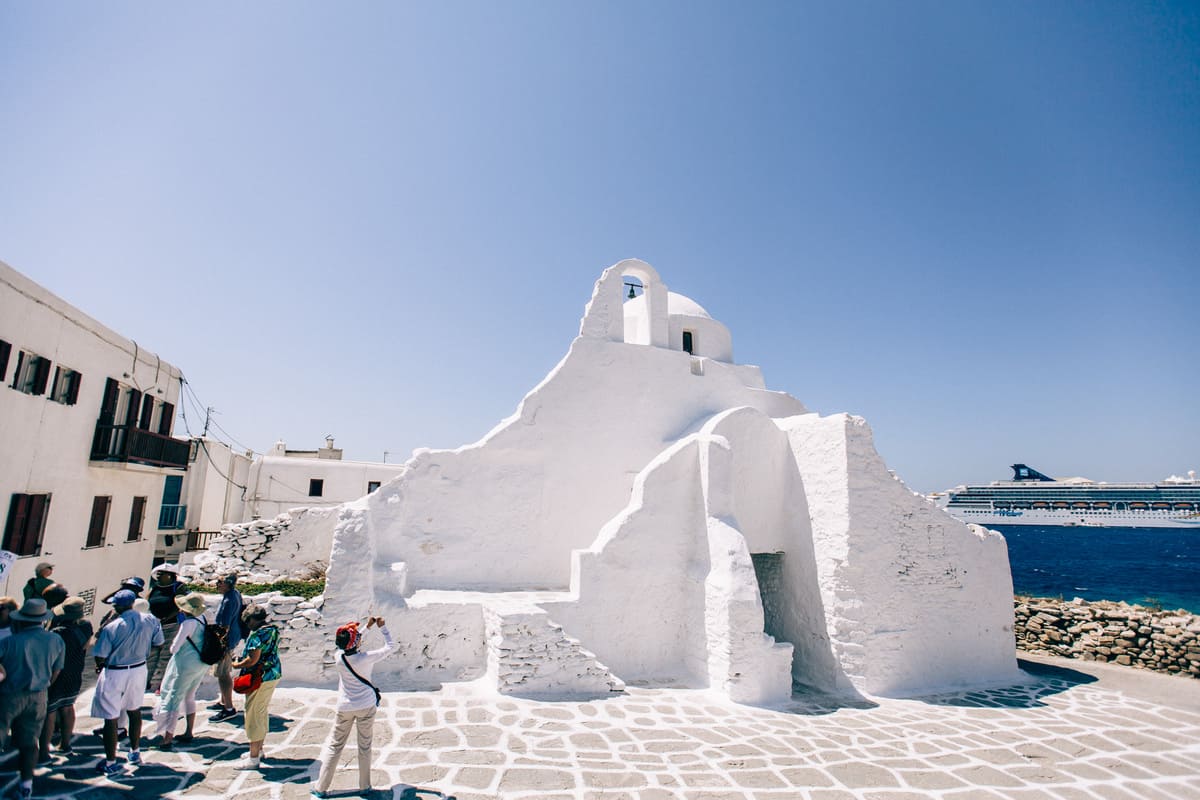 Gaudi drew inspiration from this temple

There are exactly 365 churches on the island

Food for the Gods

Having a short or long-distance run around Mykonos, it would be irresponsible to ignore the temples of Greek tastes. Only Greek, not others! There are hundreds of restaurants on the island: fashionable Japanese, Italian, Chinese ones … But if you choose a Greek-style trip, choose the places where they serve local dishes. We mean taverns. Don’t worry, these are not simple village eateries, but the focus of taste and style. And please, do not order just fish! Local taverns serve an incredible Mykonian hock cooked by the ancient recipes, which the inhabitants and guests of the island ate during the times of Apollo and Artemis. Just never be in a hurry. A Greek meal is not the work of a moment. It is a process, enjoyment, and communication at the same time.  So appreciate the traditions!

Close your eyes and imagine a served table and a number of waiters hurrying towards you with trays full of culinary delights. In Fokos it will definitely be meat dishes cooked on an open fire: full-flavoured, with crispy roasted crust and tender inside. Apparently, they know some special trick in Fokos that turns usual meat into divine ambrosia, the food of the gods. We like visiting Nikolas Taverna. In this simple and unpretentious place you will find everything you would like to know about Greek dishes: a real encyclopedia of national cuisine served in the best possible way. Mykonos cake, baked delicate Halumi cheese, taramasalata, and … But let’s keep something secret. We can only say that the tavern is really nice for romantic dinners. It is right on the beach, the tables stand just in the golden sand, and the eternal sea splashes just a few meters away. As for Avli Tou Thodori, here the chef not only plays with the Greek cuisine inventing his signature dishes but they also serve the food in a beautiful way. Perhaps, they are best known for their seafood. Want something more exotic? Why not have dinner at Kiki’s Taverna, built right on the rocks? The tavern became popular among travelers due to excellent food and romantic atmosphere.

Local taverns serve an incredible Mykonian hock cooked by the ancient recipes, which the inhabitants and guests of the island ate during the times of Apollo 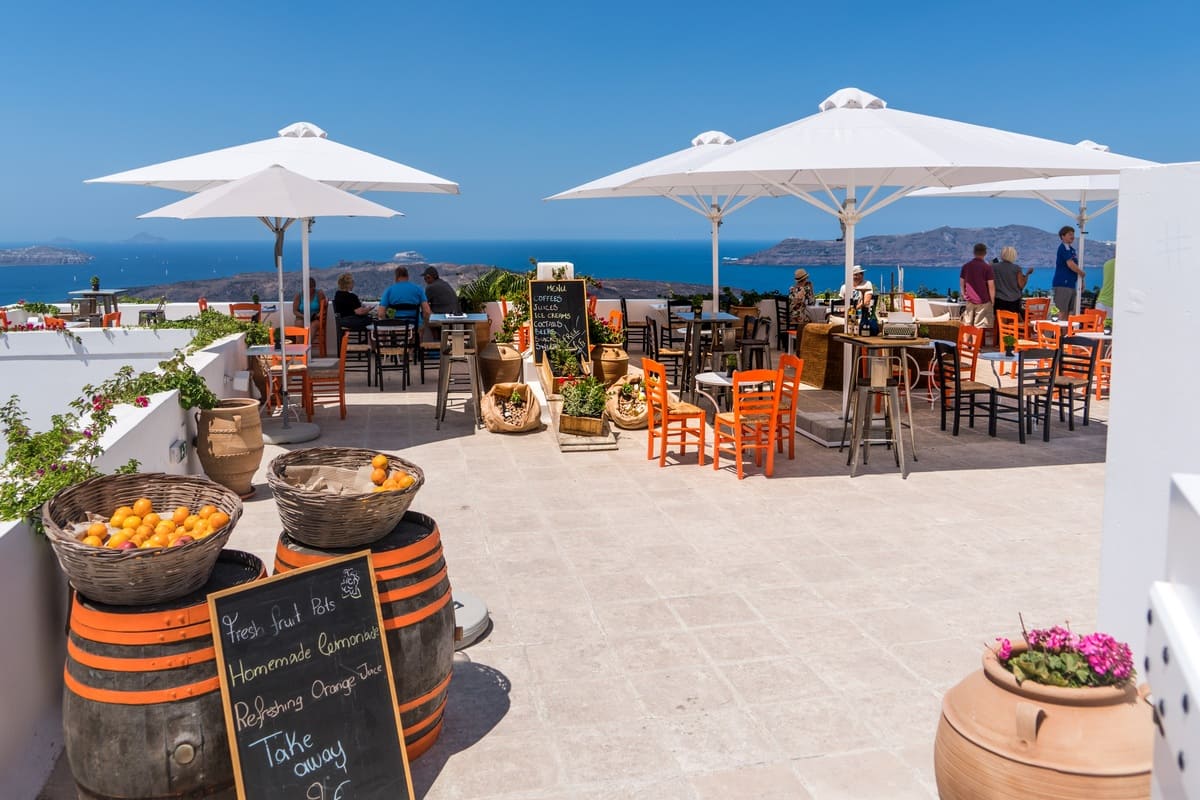 There are hundreds of restaurants on the island

They are best known for their seafood

The sea splashes just a few meters away

Well, we cannot talk only about meat. It would be unfair to forget about real culinary pleasures for vegetarians. The fashion for vegetable food could not pass by such a popular island like Mykonos. And we could not help but visit the best vegetarian restaurants. One of the joys for vegetarians is the existence of Markos Falafel

. The serve not only various and tasty food for vegetarians but also a series of delicacies for vegans. After such a meal, lovers of vegetables and herbs, although already having no signs of aggression, will be really close to enlightenment. Well, at least that was the reaction we saw. Reeza Restaurant is another great find for vegetarians. We asked some of our vegetarian friends to share their impressions after the meal. The answer was unanimous: “Something exceptional!” As you know, one should look how to reduce the degrees when it’s hot. Of course, nothing will help better than ice cream. The best yoghurt ice cream we tried on the island is served in Happyo. Try chocolate sorbet, you will not regret! Vegetarians can order everything without hesitations. Each blade of herbs, vegetable and fruit caressed by the soft sun of Mykonos is full of rich range of flavors. 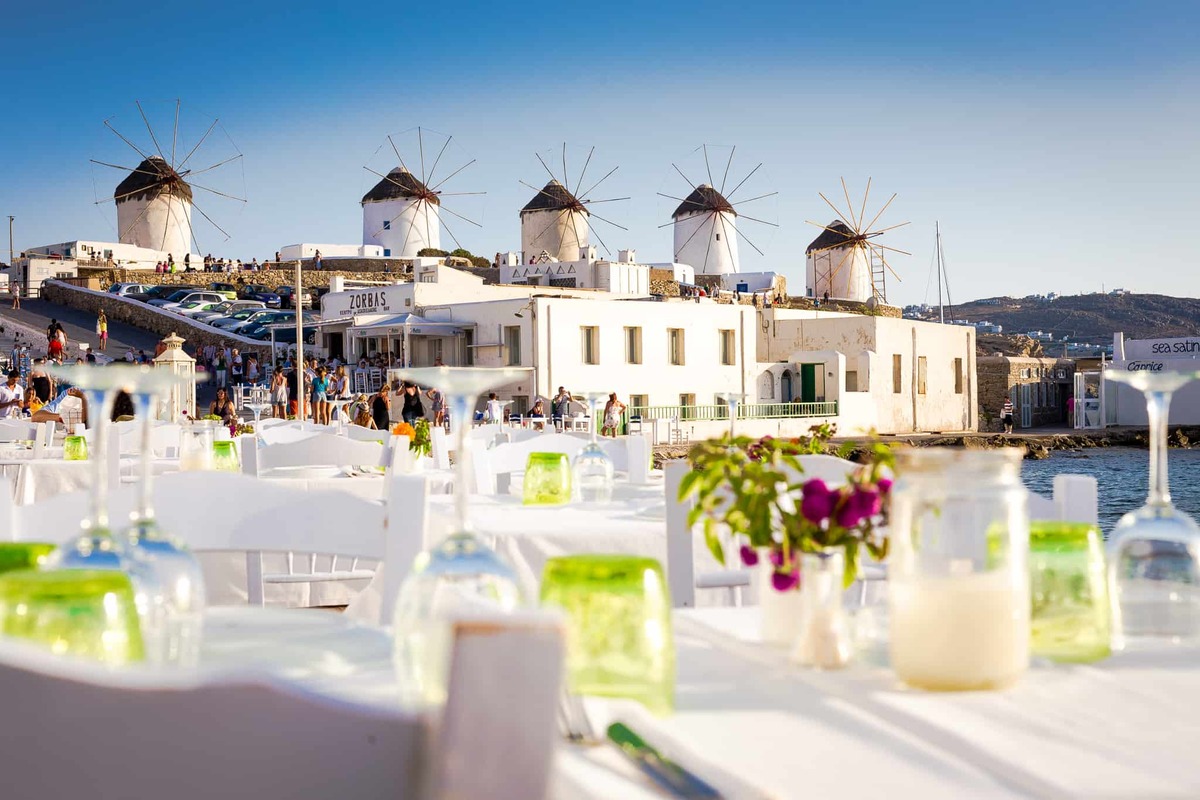 Dinner with the view

Vegetables caressed by the soft sun is full of flavors 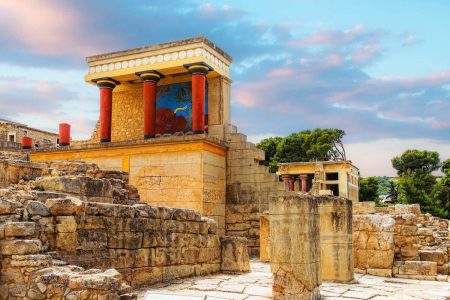 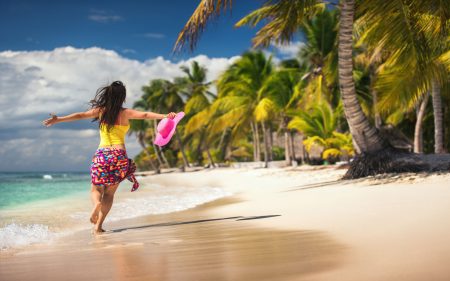