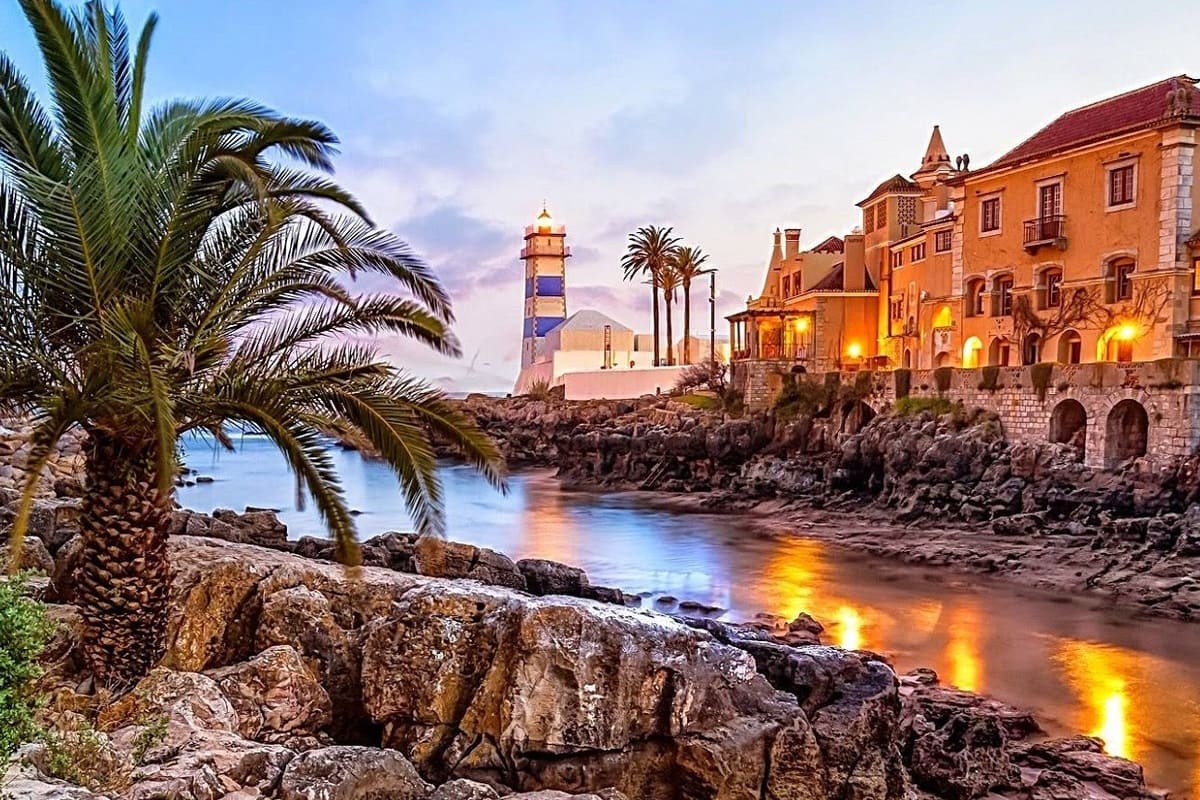 The amazing Portuguese city of Sintra dwells in the hills covered with century-old pines as if a picture of a beautiful fairy tale about knights, dragons, and princesses that came alive. The popularity of Sintra and the surrounding area is growing every year. What distinguish this place among hundreds of other attractive towns in Europe?

The secret is that every visitor to Sintra finds something special here. Someone is interested in the checkered and rich history of these places. Others are attracted by unsolved long-lived secrets of masons and the mystical atmosphere. Those who appreciate architecture will find inspiration in the walls of cutesy palaces and luxurious mansions. And some just finds the Eden in the well-groomed green parks.

Every visitor to Sintra finds something special here 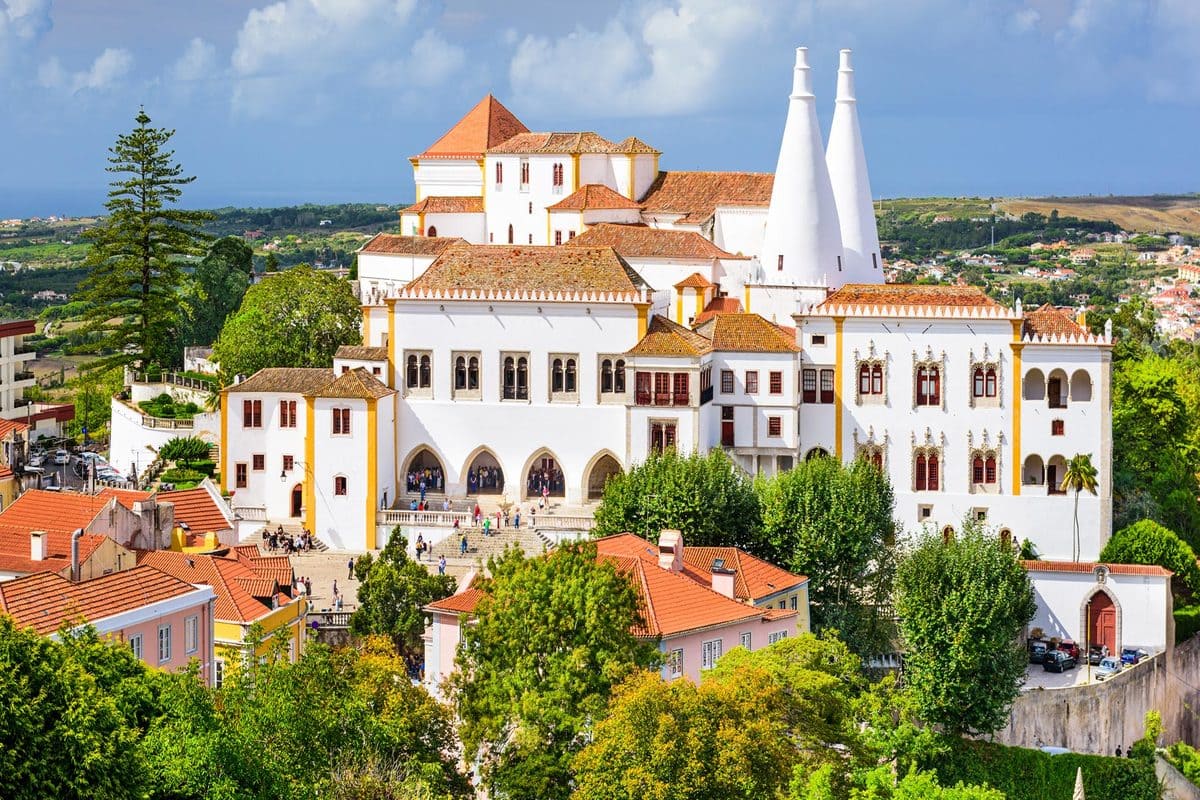 Mysteries of the Quinta da Regaleira Park Manor
One of such must-see places to visit in Sintra is Quinta da Regaleira park manor. When you get here, you will find yourself as if in another world. It seems that mysteries and secrets hide behind any turn of the park path, in the next grotto or cave. The more you learn about the history of this place, about the fate and characters of its former owners, the more you are puzzled and admire the landscape and architectural ideas of its creators. Although, undoubtedly, Regaleira’s charm is mostly due to its owner, the eccentric rich man António Monteiro, a great connoisseur of art and beauty. It is thanks to him and the talented architect Luigi Manini, who was hired by him, that many visitors to Portugal, by all means, strive to find time for Quinta da Regaleira. 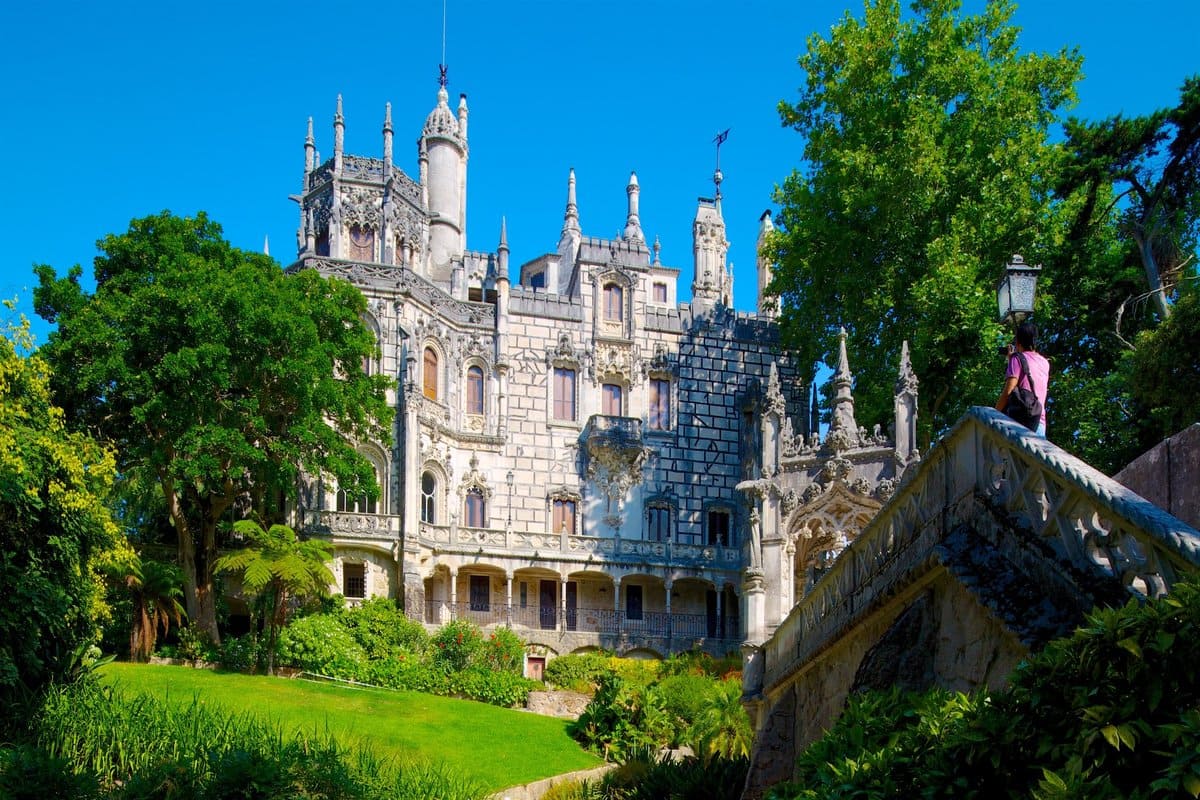 Your eye will be drawn by the Neo-Gothic castle literally from the park entrance. You can look at its facade, richly decorated with turrets and gorgeous ornaments, covered with images of birds of prey and charismatic mythical beings for hours and find with time new, not immediately noticeable details. Indulge in a walk around the palace perimeter and see it from all sides. It looks different but incredibly attractive from different angles and distances!

The interior of the palace in no way loses out to its exterior appearance. Although not all the owners of the building wanted to preserve and increase its beauty, it is impossible not to admire the bas-reliefs, sculptures, and mosaics preserved in the palace interior. Here is a fireplace with seeming openwork hunting scenes. The figures of people, dogs and wild animals frozen in stone seem to be ready to come to life and give a performance in front of the visitors joined later by revived hounds and deer from the magnificent Venetian mosaics on the palace halls floors. 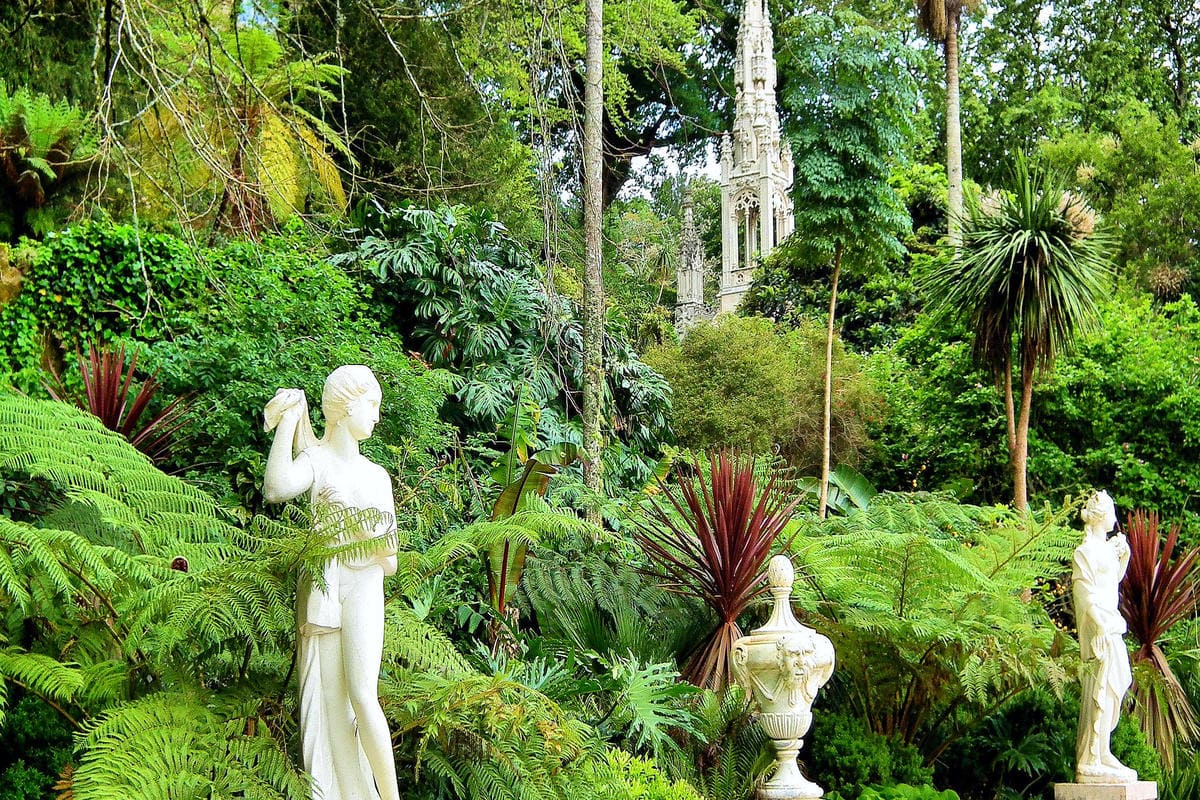 The figures of people frozen in stone

The interior of the palace

Secrets of Masons
Three attractive female figures on the library ceiling make each visitor freeze with his head up. Images of beautiful maidens against a cloudy sky, symbolizing strength, wisdom, and beauty is one of the many symbols of the masons in the palace. Although there is no documentary evidence of whether António Monteiro was in one of the secret lodges, an attentive visitor to Quinta and Regaleira will find signs and eloquent hints of this at almost every step throughout the area.

Those who are not too lazy to climb to the very top, to the roof of the building, will be rewarded not only with a beautiful view of the surroundings. They will see the most mysterious and secret place in the palace: the entrance to the alchemical laboratory. The doors of the laboratory are securely guarded by the stone figures of mythical creatures. They keep the secret of the disappeared laboratory equipment, leaving room for hypotheses and assumptions of historians interested in this issue. 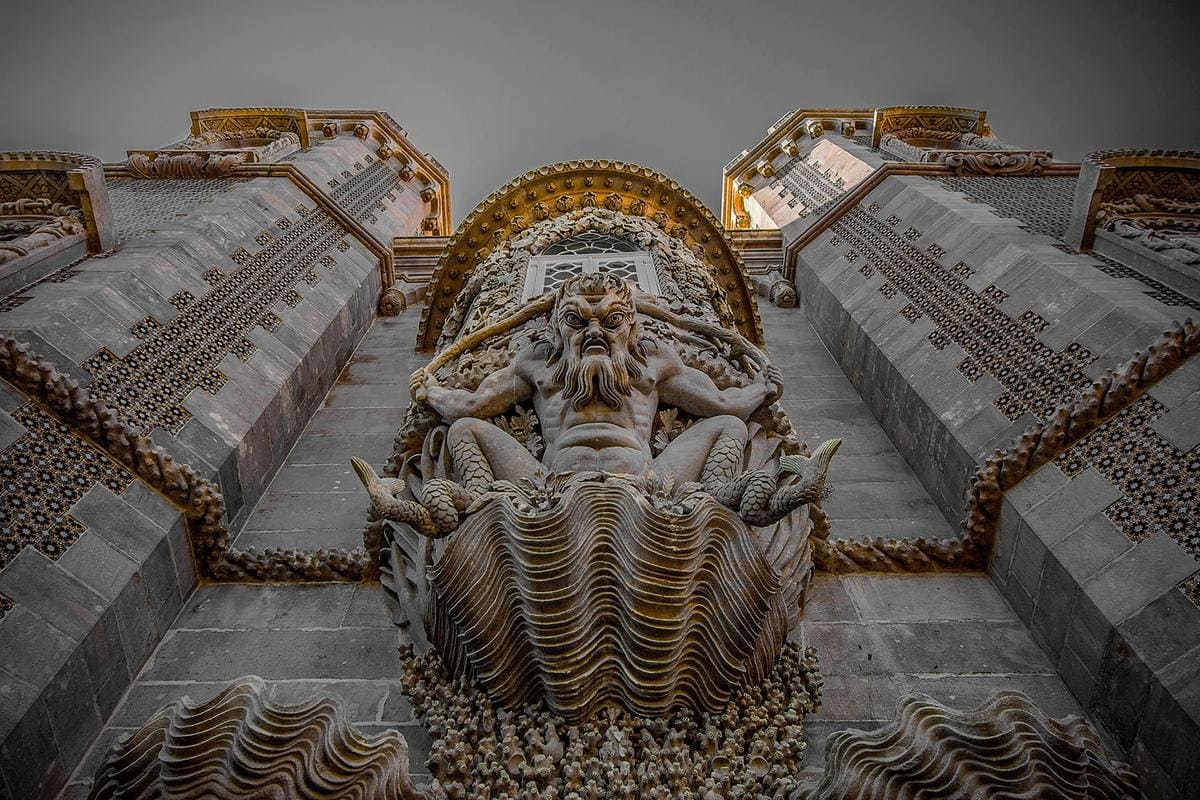 Leaving the palace still inspired by its interior, visitors can admire a miniature chapel which has its own secrets. Looking closely, you will easily find neighboring symbols of the Order of the Cross with the Masonic signs in its refined decor.

Visitors who continue walking along the alley in the lower part of the park will recognize many famous gods such as Neptune, Dionysus, Flora, Orpheus, Venus, and many others in the stone classical statues. They are all in their places in the shade of lush greenery. The higher the guests climb up the mountain, the narrower are the paths and the thicker is the tropical forest. That’s exactly what Monteiro aimed to achieve: it seems that fancy grottoes, fish ponds, every pebble in the garden and plants there were created by nature. But all this is man-made: stones were brought from the coast and the choice of plants is not at all accidental.

It seems that mysteries and secrets hide behind any turn of the park path, in the next grotto or cave 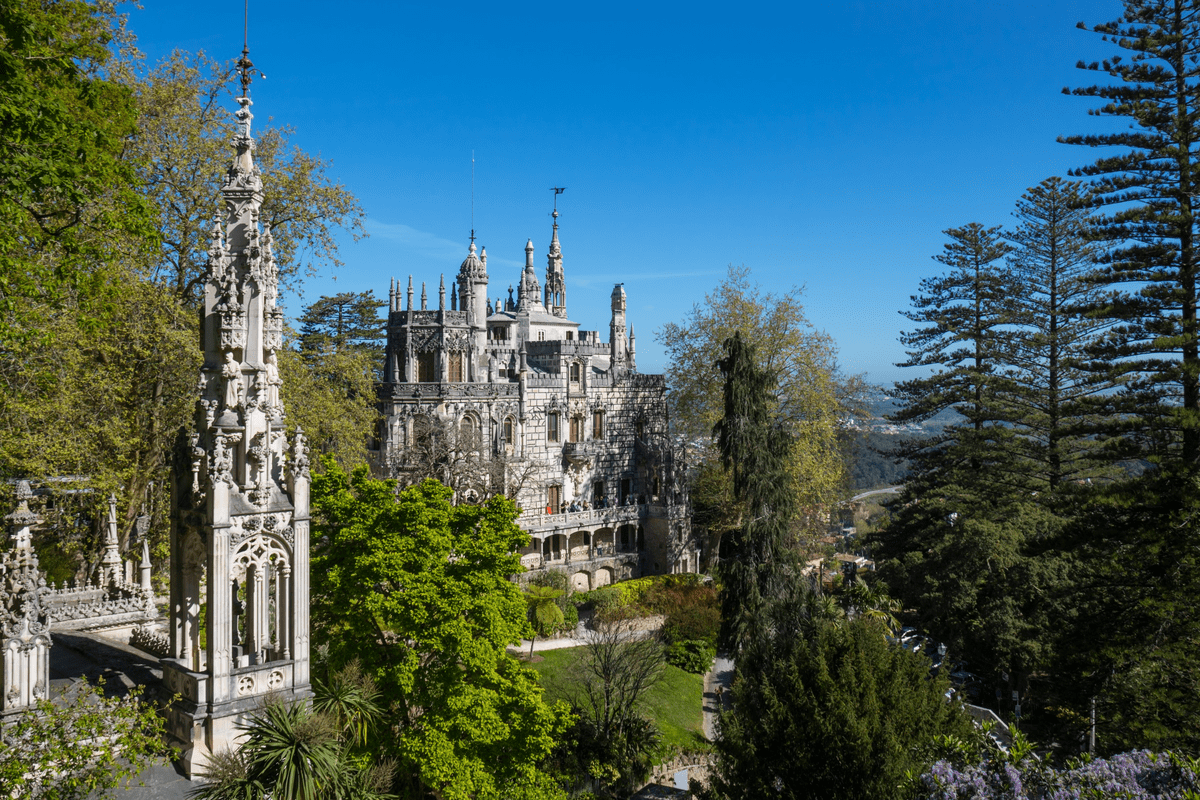 Mysteries is hidden behind any turn

Continue walking along the alley

The Mystical Initiation Well
However, according to lovers of conspiracies and secrets, charming buildings, sculptures, stones, and alleys are only a prelude for the really most important place at Quinta and Regaleira. We speak about the Initiation Well of Initiation, the entrance to which is so cunningly disguised that it is not at all easy to find! But if you succeed in finding it, you will simply be at a loss for words from what you see.  A quite unusual deep well looking more like a tower “growing” down and “lowering” ordinary mortals to the bottom with the image of an eight-pointed star, i.e. to the place of initiation.

A dark spiral staircase with moss-covered railings surrounds a gloomy well 9 times and leads to the dungeon recalling the circles of hell. It is like a transition from light to shadow, from the ordinary world of people to the other world. Everything looks and feels so creepy and dramatic that even the bravest tourists will have shivers running up and down their spine. The exit from the dungeon is also impressive: through low-pitched dark underground labyrinths with ponds – to the light and the waterfall above the entrance: a symbolic complete purification.

Attentive guests of the manor park will easily find many more secret signs there like the all-seeing eye, images of lilies and trefoil, and symbolic ornaments of numbers and knots. Quinta da Regaleira will not leave anyone indifferent, even the tourists who are not experts in this topic.

The Bright Colours of the Pena Palace (Palácio Nacional da Pena)
Leaving the mystical well and lush greenery of the park manor, it’s time to change the environment and go just a few hundred meters up to one of the highest hills of Sintra. You will get to a place with a completely different energy – the Pena Palace.

It was not always so photogenic. Back in the day, there was an unremarkable chapel here. Later, the monastery of Our Lady of Pena was erected although it did not last long due to an earthquake and fire. Only in the XIX century, the palace with gray unremarkable walls was constructed. They obtained their bright colours not so long ago. Now both the palace and stunning views from its numerous observation platforms, terraces and turrets to the valleys, hills, and ocean coast make Sintra and its surroundings a fantastic tourist destination.

Take a walk, breathe in the fresh eucalyptus air, look closer at the monster guard hanging above the entrance, and do not forget to look at the outlines of Lisbon in the distance in good weather. Have a break from the bright colours of the palace and the open sun in a huge palace park looking more like an enchanted forest. One of its paths leads to a cross on the highest point of the ridge where you can enjoy the best view of the Pena Palace.

It was not always so photogenic

Cabo da Roca Cape – the End of the Earth
Having enjoyed fantastic architecture and cozy parks, you may want to escape to a wild place on the edge of the earth. Even this is possible in Portugal! The western-most extreme western part of Europe, Cabo da Roca Cape, is just nearby. Just some 10-15 km from the center of Sintra, and the mesmerizing sound of the waves, wildlife, rocks, and stones are waiting for you. Di we need to mention that this rocky coast becomes even more enchanting at sunset, when the sun slowly sinks in the ocean? 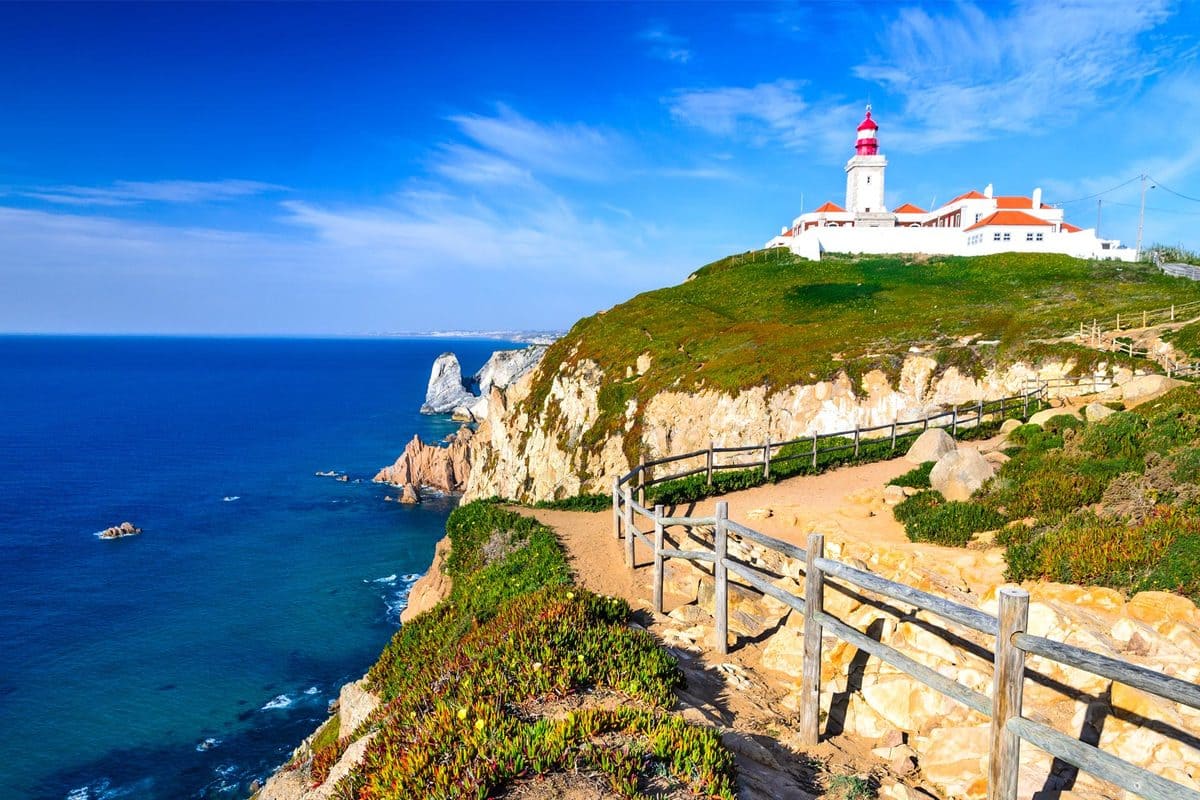 Although you will easily find several places in Sintra itself and in its numerous parks on the hills where you can admire breathtaking sunsets every evening. Perhaps it was this factor that played a significant role in the fact that the colourful atmosphere of Sintra had been a refuge for philosophers, monks, and kings for hundreds of years. And now it has rightly become a cozy haven for tourists from all over the world.